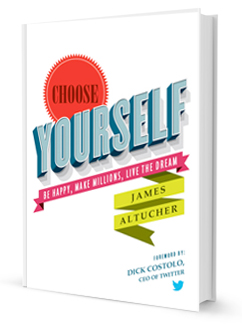 On the evening that I finished reading James Altucher's new book Choose Yourself, the nightly news lead with the story of 260 employees at Target's Geelong headquarters being made redundant.

Footage showed these newly-unemployed leaving what used to be their place of work. Most were visibly upset, many were crying and some stopped to express their frustration to waiting reporters:

"I can't actually believe it's happened. I've worked my whole life since I was 15. I've never lost a job. And I've got a mortgage to pay and, you know, all the bills to pay. I need a job."

"I moved down to Geelong specifically to put my heart and soul into Target and this is how you get rewarded, so it is disappointing, yes."

Only weeks earlier Ford announced the closure of its Australian plants, a decision set to cost 1200 workers their jobs. More recently, IBM and several others have announced mass-redundancies as Australia's burgeoning economy finally enters its inevitable slowdown.

Economic cycles are nothing new and organisations will inevitably hire in good times and fire in bad. However the Information Age has rendered many of the old paradigms of employment obsolete for both employers and employees alike. Those who fail to adapt may well be left behind, but a new age of opportunity beckons for those willing to embrace a fresh approach.